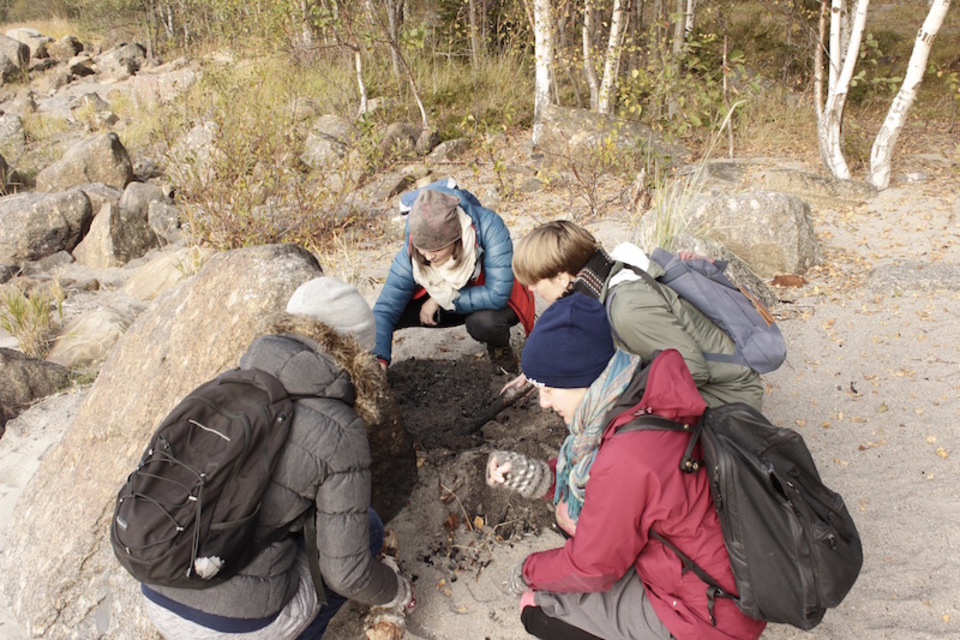 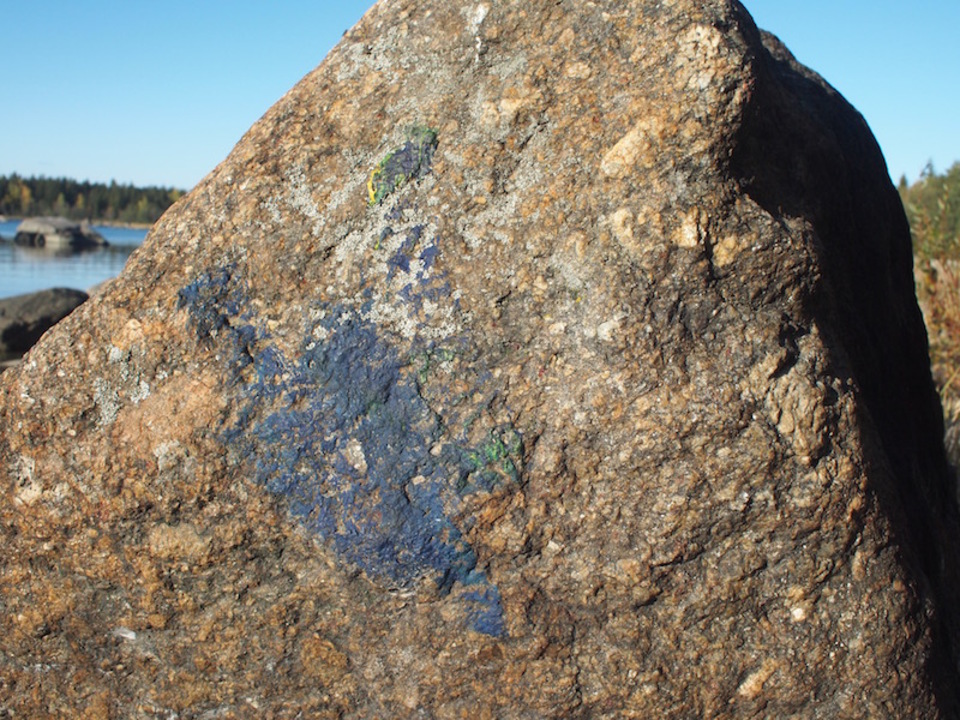 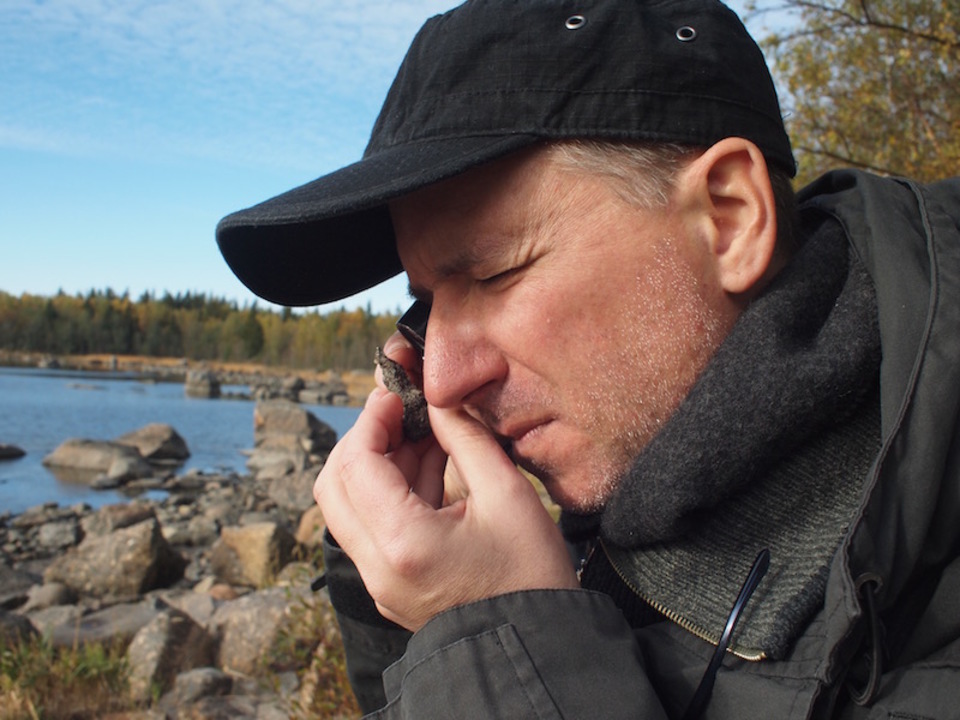 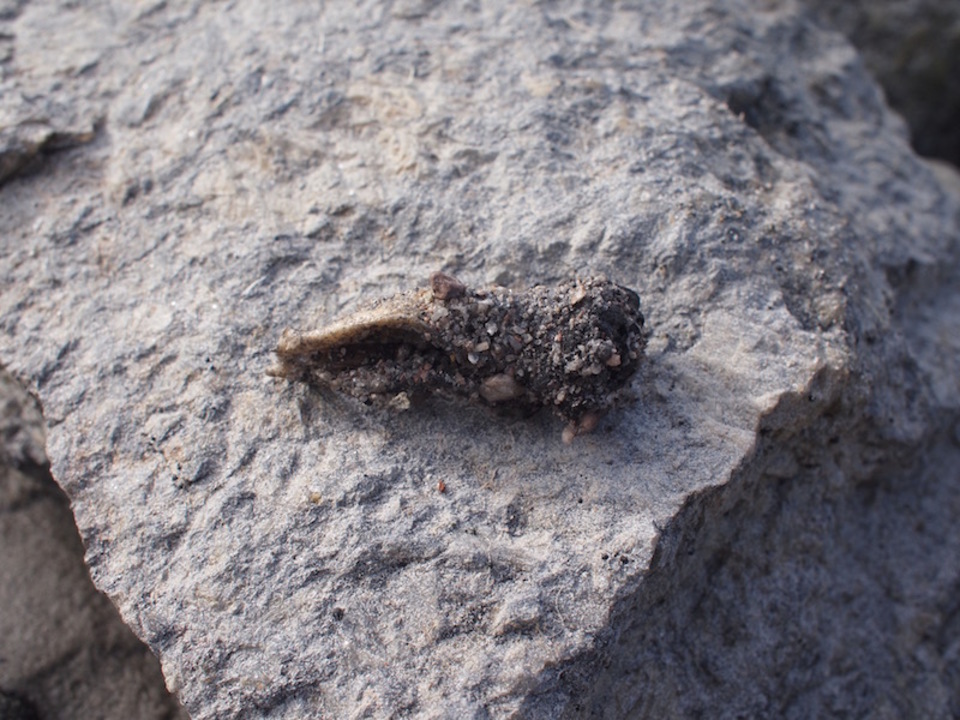 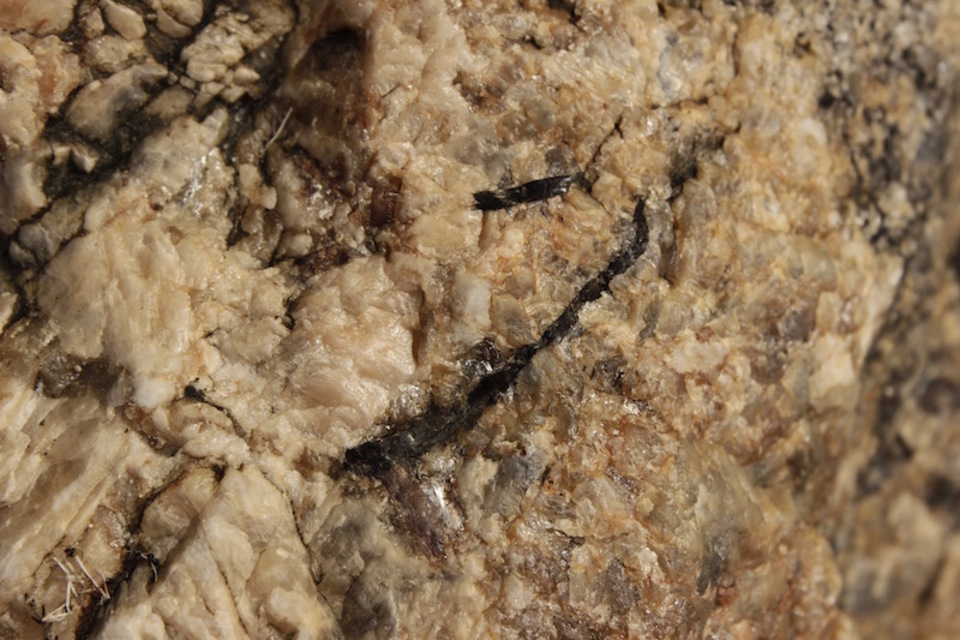 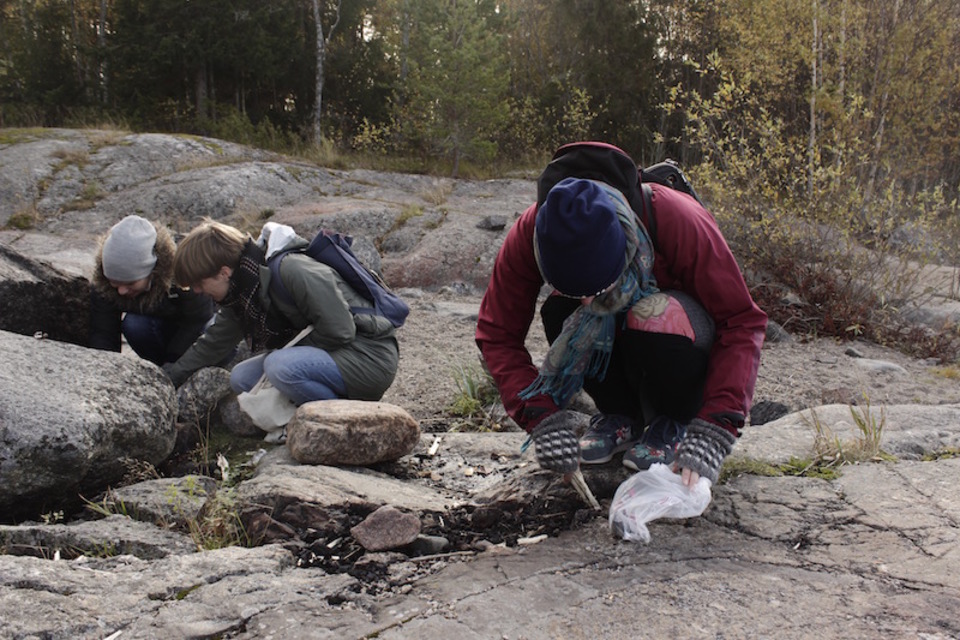 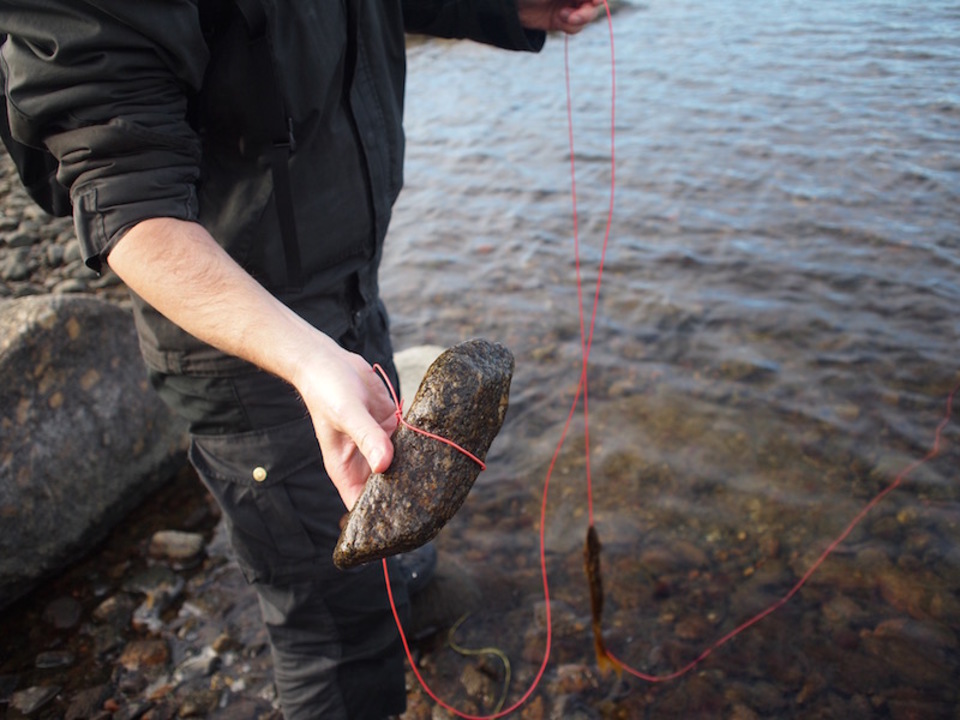 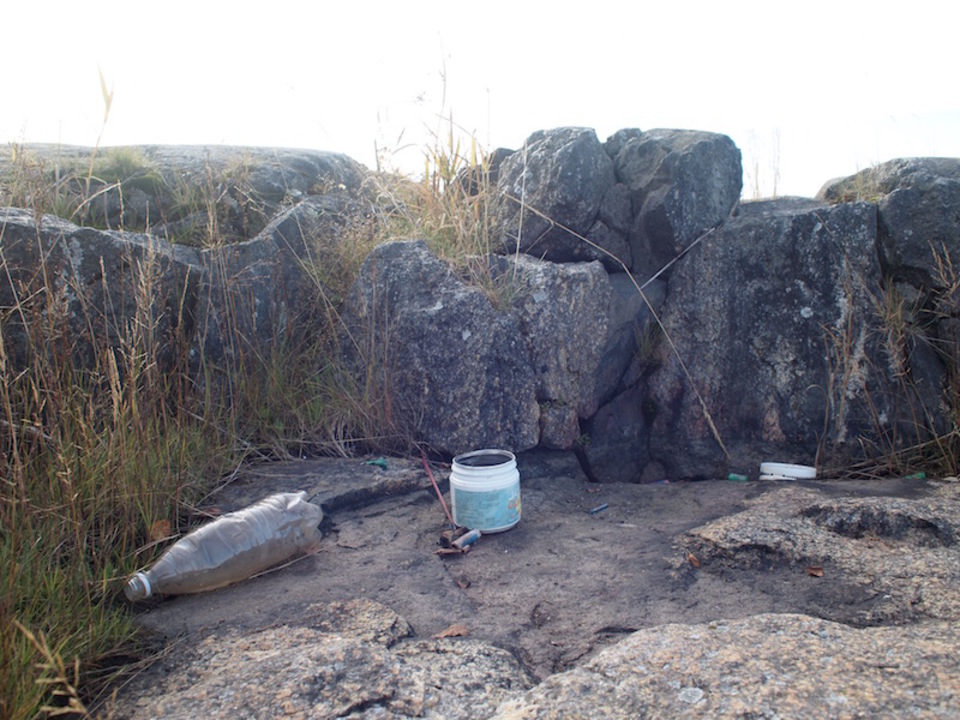 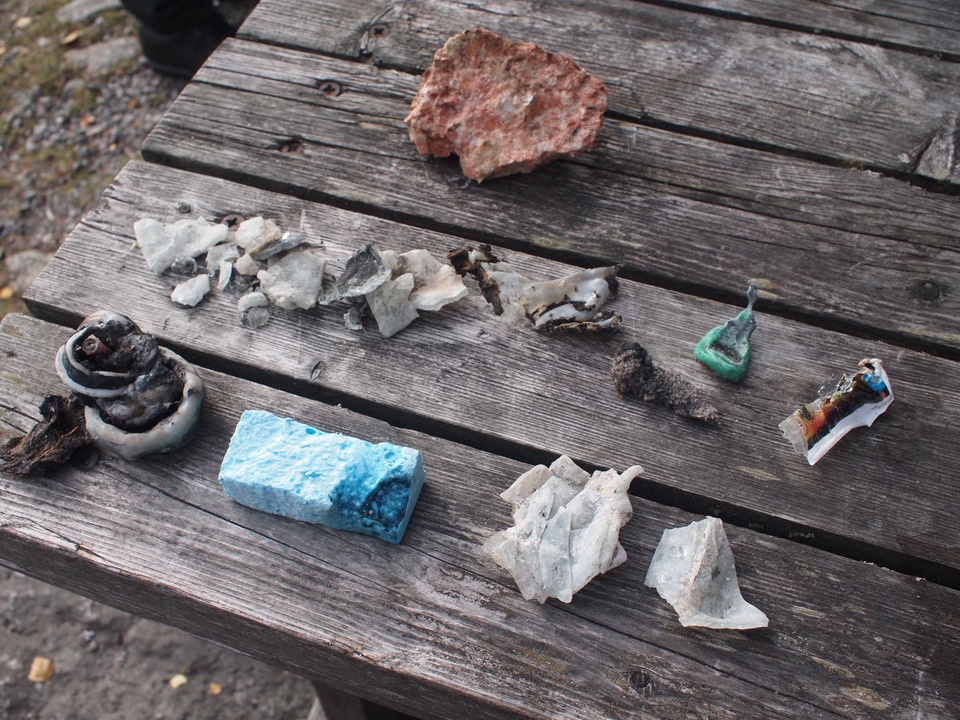 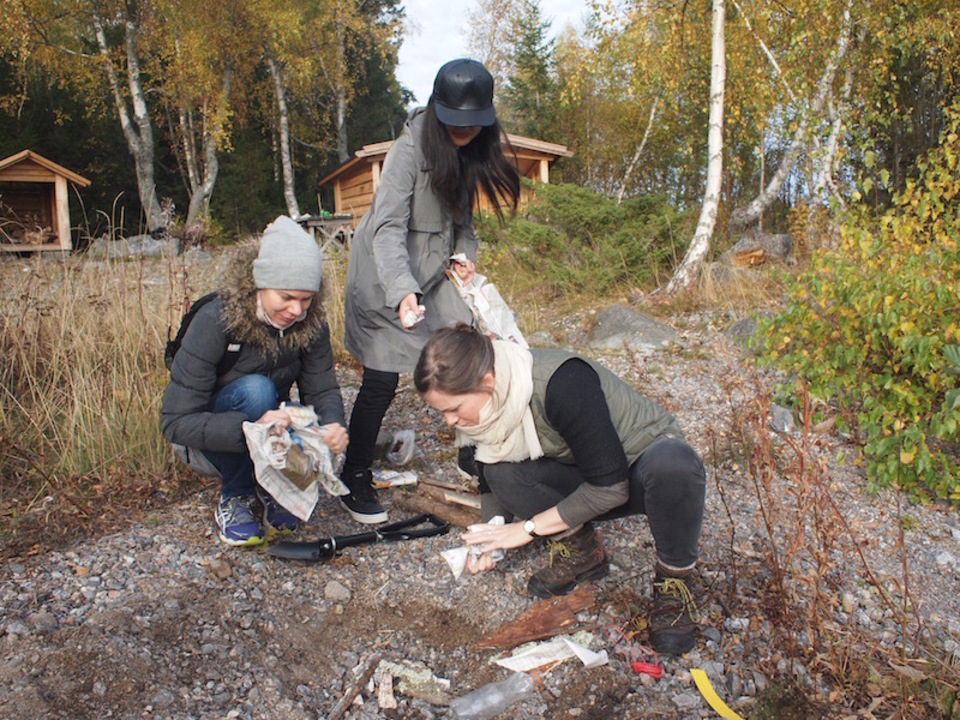 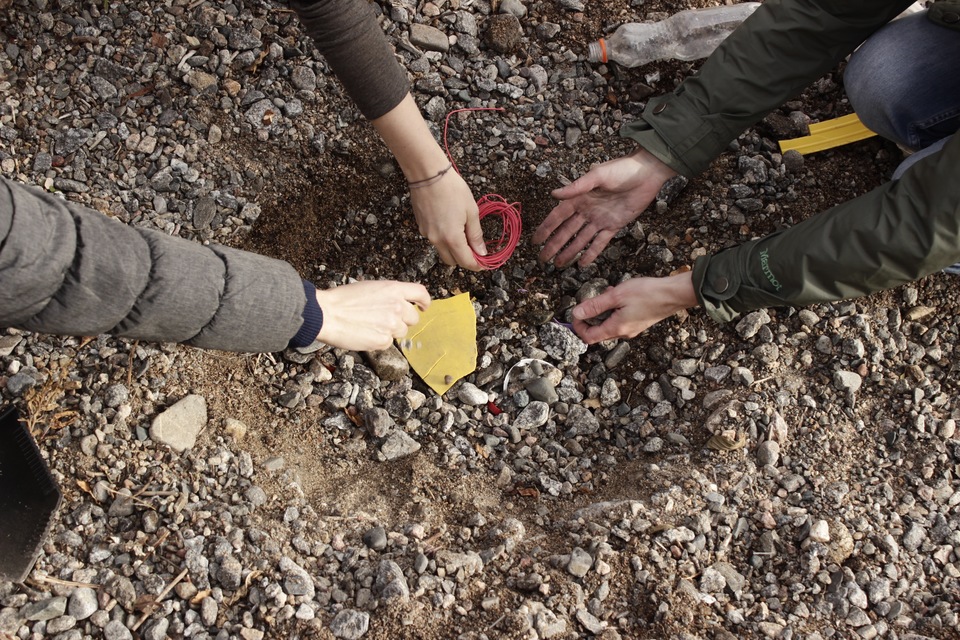 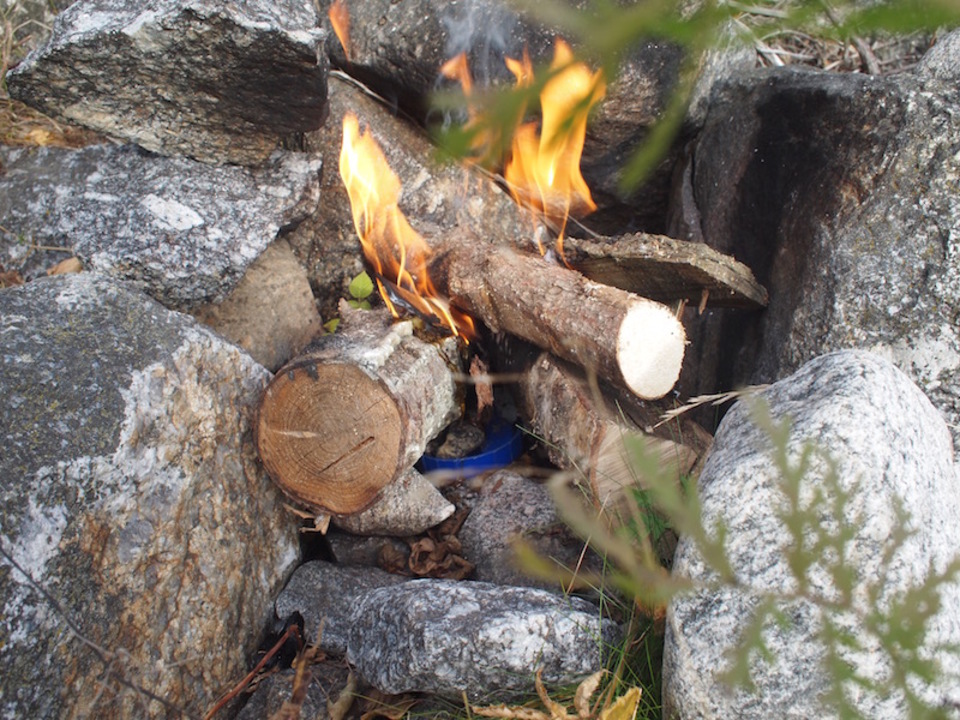 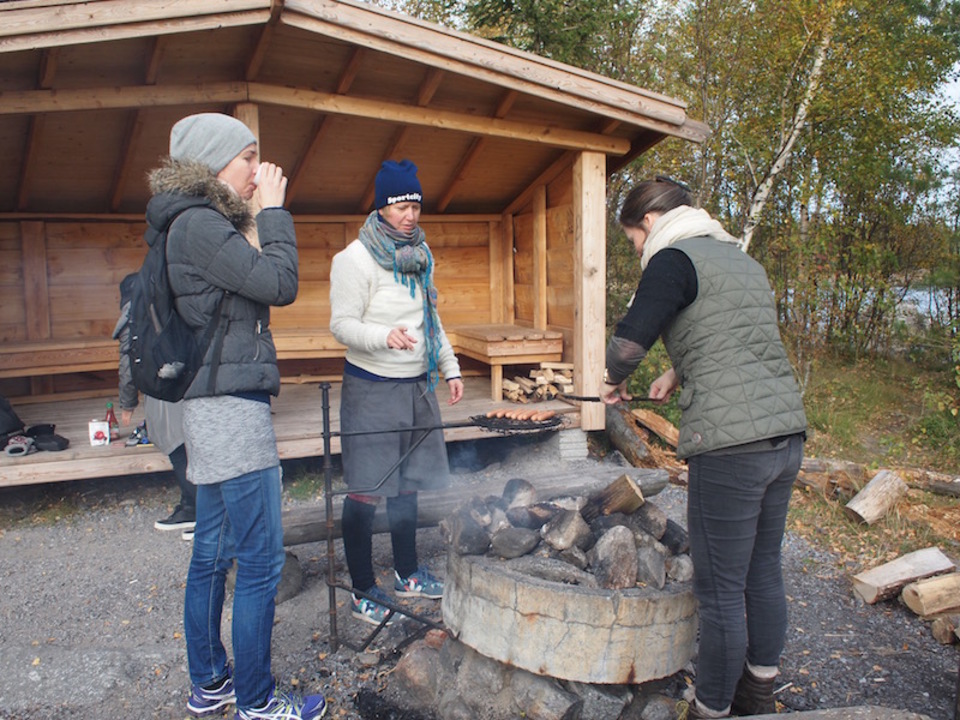 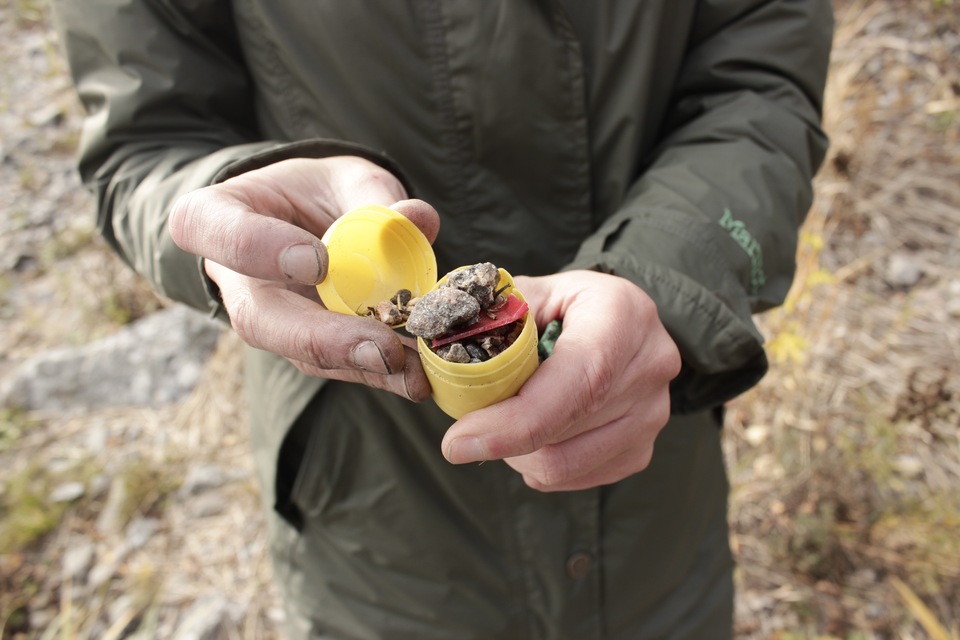 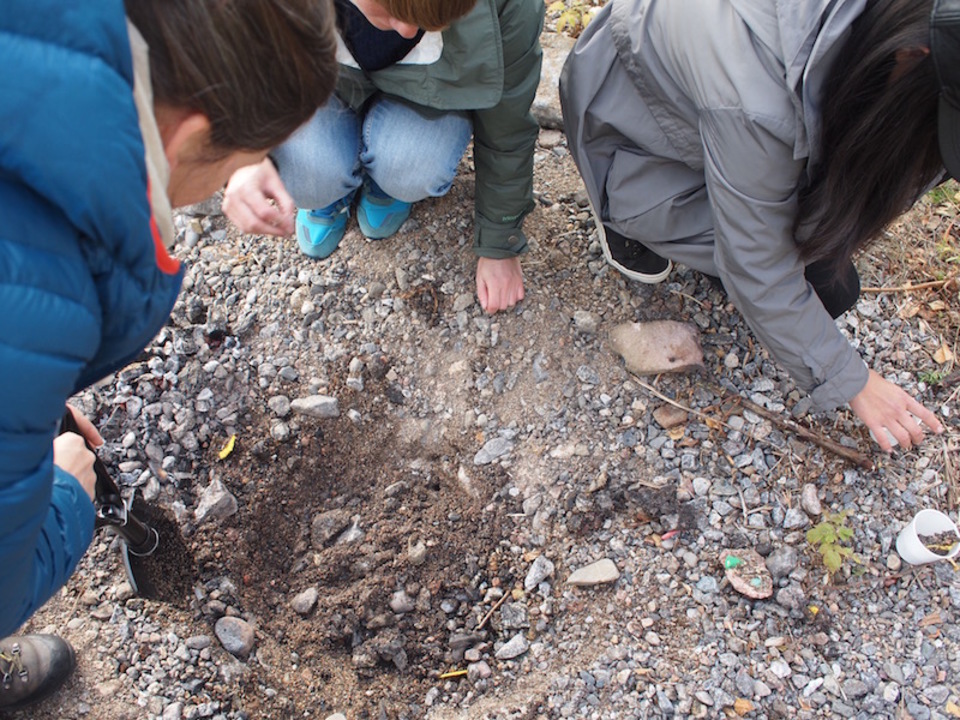 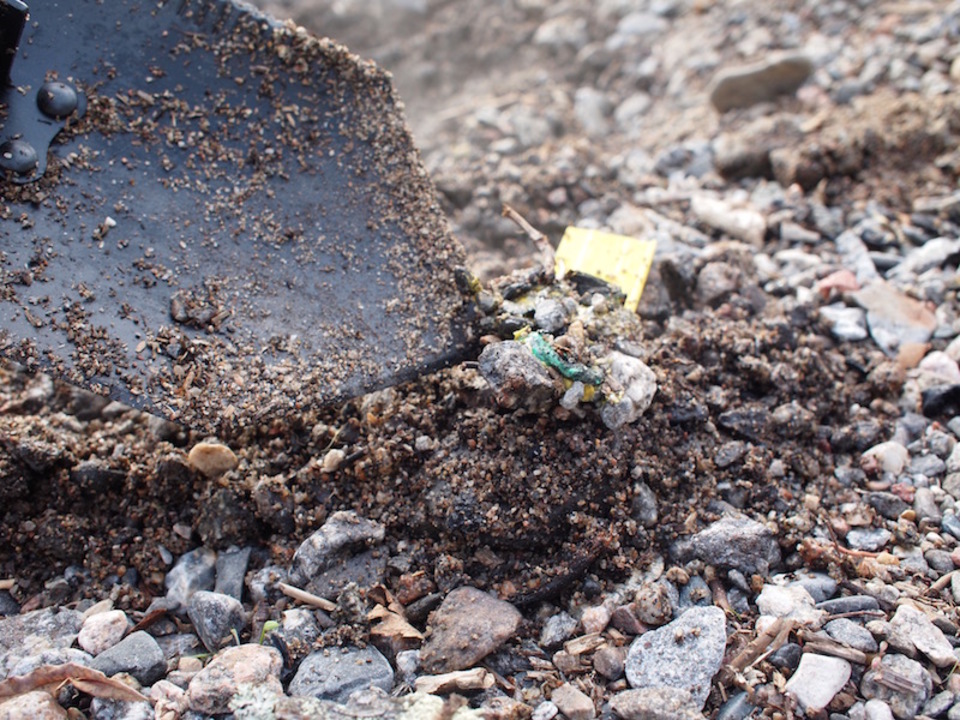 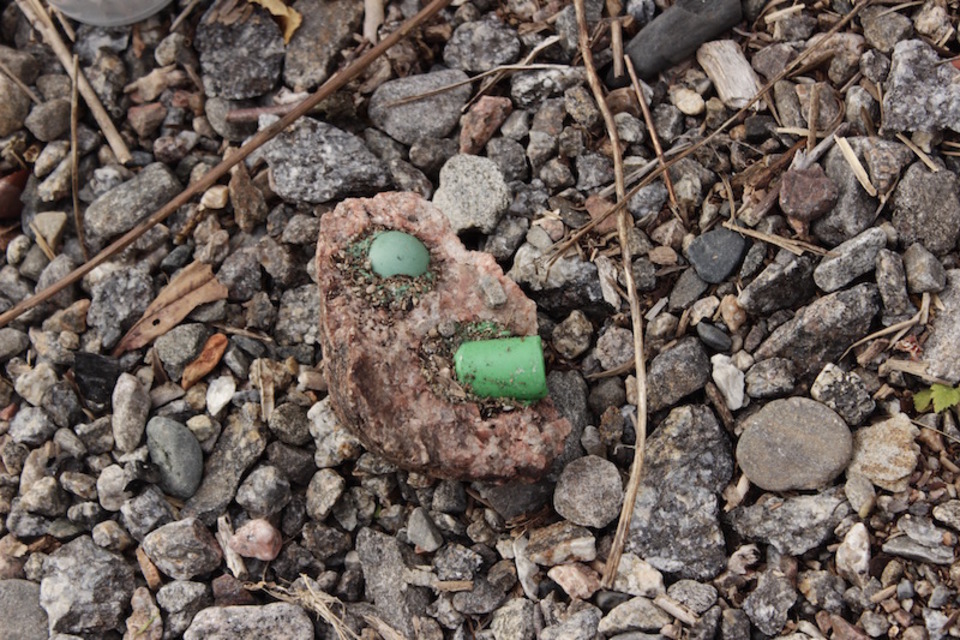 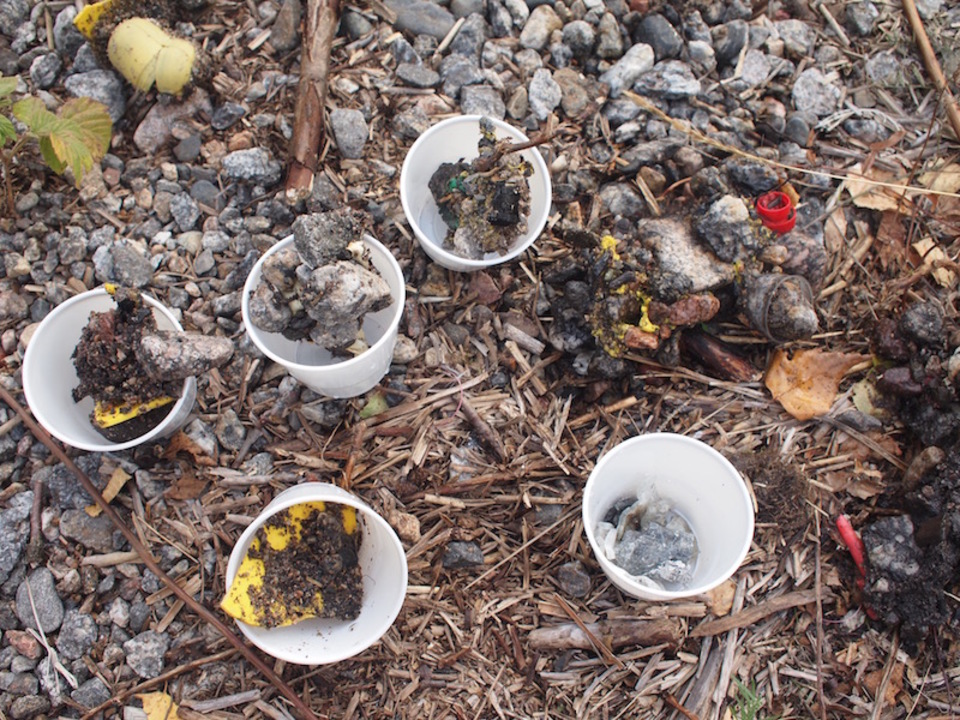 Saturday 10th October, Hålören, Södra Vallgrund, Replot: Gathering at 11 am at the postal office opposite the railway station in Vaasa if you want a ride with us. Or at noon at Fort Sommarö if you get there yourself.

REPLOT
The giant Finn dropped stones from his backpack when he was making his way across the Baltic. As this loss enraged him he also started to throw them around himself. Those stones now make up the Quark archipelago. We are also part of making the landscape - intentionally or not.

When we arrived at the beach in the geological world heritage of Osthrobothnia we started to excavate a campfire. A big stone next to it was burnt on the one side and on another there was colour; green, yellow and blue. It looked like plastics. One of the participants, Sylvia Javén, is a painter and as we said that it looks like plastics, she said that it is probably acrylic painting.

As part of her professional skills Þóra Pétursdóttir, contemporary archaeologist who joined us from Tromsø, systematically scraped off the sand of the campfire. We tried to assist. We found something that looked like a plastiglomerate. Or, was it a bone? Erich Berger, director of Bioartsociety with thorough geological knowledge, brought out his loupe so we all could have a closer look. Yes, with that optical technology it looked like plastic. Thereby, lots of different skills, technologies, and knowledges contributed to knowing more.

One hour passed very quickly on the beach as we hung out there, looked at possible rare earth minerals, went in different directions with different pace. More fireplaces were investigated. Fire crackers, beer cans. Disposable containers. A cyclope. A wire attached to a stone - used for fishing? A bottle with a firecracker was found and one participant said: It is as if a whole event is captured in this object.

When finding things on the beaches we cannot help ourselves from trying to trace back where they came from, what they have been through, with whom and so on.

To further explore how plastiglomerates come into being we decided to do some experiments. We dug into the beach, buried some of the found plastic material in the ground - some stones were put into a plastic capsule for example - and made a fire on top of it. We also used a fireplace that somebody else had made and heated up plastics on the open fire. Plastic was melted, with fumes visible and with effects on our breathing. A yellow piece of plastic was used almost like a brush.

The fires in this case were however not only part of exploring how plastiglomerates are produced. We also used the fire as a gathering point, and to barbecue. It is a very different way to gather compared to the more distributed walks along beaches.

When discussing the anthropocene different factors are often mentioned as its starting point - agriculture, steam engine and the great acceleration. Another marker is the ability to manipulate fire. Stephen J. Pyne  describes how humanity’s ability to make and unmake fire has influenced how landscapes and we are made. He also describes that we are highly dependent on fire in our everyday lives, although in parts of the world humans are losing direct contact with fire since it has been moved into machines.

Through our explorations with fire we could say something about how plastiglomerates are made. However, things could also be approached not for what they were, but for the effects of them being in a particular place at a particular time with particular relations. For example, Þóra Pétursdóttir who does research on plastic debris on beaches, puts focus on what it does rather than where it comes from. She gives the example of driftwood that has been used as a resource in wood-scarce Iceland. Land where currents washed driftwood ashore would be given a higher value. As late as in the 20th C spots for driftwood would be used a selling point in ads for property on sale. Is plastic that washes ashore or ends up on a beach after recreational activities also a resource? For whom? Different species use drift matter for transportation. Bacteria seem to eat some of it, but many are also killed by it.

To do some research on what work plastiglomerates does we made a quick search on instagram and found that plastiglomerates are used as a tool to raise awareness around environmental issues, for example, when exhibited in galleries. In private instagram pictures it shows up as a curious object. We have also seen it appear as inspiration for making jewelry.

None of them take up plastiglomerates as a finding of a new resource in the way the finding of a rare earth mineral would be. Rather than feeding into the narrative of “hey, we’ve got some more resources here that can be exploited, let’s continue this industrial trajectory where nature does work for us”, it could be argued that the finding of plastiglomerates suggest that our natureculture past is communicating with us, reminding us of the unavoidable unintentional effects of a co-living of humans and more-than-humans over time.